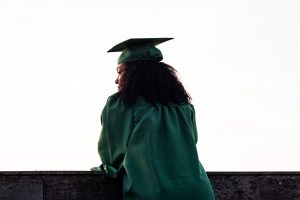 Students have been hit the hardest during COVID-19 and will now also face a disadvantaged future. Photo by Andre Hunter.

Australia needs to invest in the future of young people. Is it the student’s responsibility to fight, or the Government’s to change their mind?

Education Minister Dan Tehan’s university funding changes will negatively impact young people planning to attend university, with many anticipating disproportionate impacts on women, disabled and Indigenous students. By 2023, the Job-Ready Graduates (JRG) package will provide an additional 39,000 places, with price increases in humanities and arts (up 113 per cent), law and commerce (both up 28 per cent) to pay for reductions for in-demand courses such as teaching, nursing, math, science and engineering. The fee restructures ultimately decreases the total Government degree contribution from 58 per cent to 52 per cent, with student contributions rising from 42 per cent to 48 per cent to pay for more places.

How will the fee hikes affect WSU?

In a recent Western Sydney University (WSU) Academic Senate meeting, undergraduate representative Hollie Hammond asked whether the university’s standing as a leader in gender equality will translate to supporting the female students expected to be unfairly disadvantaged by the reform. She described WSU’s response as “vague political language”, with Executives emphasising the legislative nature of the changes, implying WSU must simply adapt. University Executives further emphasised the importance of a counter-narrative to highlight the value of humanities, reminding that the Higher Education Contribution Scheme (HECS) repayments were contingent upon income.

Though it was unclear how the university would deliver this counter-narrative, Hollie was unsurprised that WSU would shift focus to emphasise the importance of humanities. She felt universities now had an incentive to attract and retain students in courses with increased fees. University Executives confirmed statistics are indicating humanities enrolments remain stable.

“But what will you do about the fact that we will now have a generation of women being saddled with an astronomically higher HECS debt, which they already take longer to pay off, to say nothing of the wage gap and lower levels of super?” says Hollie.

Being a student mother, Hollie would ideally like to see if the university plans to shuffle their budget around to offer scholarships or subsidies for women in the arts.

Since universities will not be explicitly needed to supply places in national priority fields under Tehan’s scheme, it depends on universities deciding to respond to student demand. Some critiques of the reform have legitimised student concerns, including that there might potentially be an incentive for universities to recruit even more students in the humanities.

Male students dominate almost all degrees set to become cheaper, arguably due to institutionalised gender bias. Minister Tehan argues that the proposed changes will encourage gender equality by supporting the study of STEM at the tertiary level for more young women. However, financial incentives are not overly useful in promoting gender equality.

Both the United Nations and the Australian Commission on Human Rights have cautioned that COVID-19’s numerous social and economic impacts are undoing decades of progress towards gender equality. During Research Week, the Science in Australia Gender Equity Group at WSU conducted a discussion on how Australian universities could work in partnership with industry and communities to mitigate the gender effects of COVID-19.

There is a gender wage disparity from the time women graduate from university. Some of the largest graduate pay disparities were identified in science, mathematics and agriculture in 2019, while communication was one of the few places where female undergraduate median salaries were higher than or equal to their male counterparts.

It could be argued that the cut in nursing degree fees is proof of women being accommodated by the Federal Government. Nursing, however, has always been a highly feminised sector, as well as one of the lowest paying and highest risk occupations. Nurses were subject to public-sector wage freezes during the COVID-19 crisis and were exempt from stimulus packages.

Humanities and social sciences consistently attract more students than any other subject in the field – most of whom are women. Data from the Workplace Gender Equality Agency (WGEA) reveals that women will graduate with much higher debt from HECS, which will take longer to pay off due to lower lifetime earning rates and extended periods away from the workforce. Over the past ten years, women have always represented the bulk of enrolment in humanities and social science disciplines. They accounted for two-thirds of enroled students in 2018. 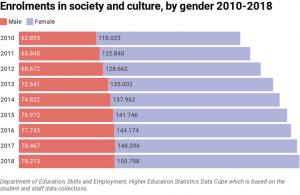 What does the Government think?

Vicky-Rae Renier-Clark, SRC Campus Representative for Bankstown, attended the Future of Education Panel with Tanya Plibersek (Shadow Minister for Education and Training), Angelo Gavrielatos MP and Prue Car MP at the Labor National Conference. At this panel, she echoed the questions raised in WSU’s Academic Senate a few days prior, asking how Labor’s stance on gender equality would fit within their response to the JRG package.

Tanya Plibersek mentioned that it is evident that the budget put forward by the Morrison Government was not compiled with women in mind. She also identified that the JRG package would disproportionately impact Indigenous students and students with disability.

Labor identified a 21 per cent increase in domestic student enrolments since COVID-19. However, the Morrison Government was attempting to strip funding from universities and students; with over 21,000 academics recently losing their jobs.

James Newbold, NSW Education Vice-President of the National Union of Students, believes gender equality should be a key demand of students in response to the fee hikes and the struggle for a better education system.

“History shows that Governments are hostile to equality in the education system, and universities are infamously bad at standing up for students, especially those most in need. Students then have no choice but to stand up for what is right and demand fairness in our education system,” said James.

Students have already undergone interrupted learning, isolation, record loss of jobs and will inherit a generation of debt because of COVID-19. While some students graduate into a recession, others now face racking up a massive HECS debt.